After years of militant and military control, the Somali national stadium in Mogadishu will return to a place for sports.

The stadium had been occupied by the Islamic militant group Al-Shabaab before it was taken over by troops from the African Union’s peacekeeping mission in Somalia (AMISOM) in 2011.
AMISOM forces have used the stadium as an operating base ever since.

At a handover ceremony on Tuesday, AMISOM and Somali officials toured the war-torn stadium and invited the nation’s youth to come and play.

“Today’s handover ceremony at Mogadishu Stadium it gives our youth & sports an opportunity for youth to use the Stadium,” Mogadishu Mayor Abdirahman O. Osman said in a tweet.

Somali President Mohamed Abdullahi Farmajo also attended the ceremony and lauded the handover as a sign of the country’s long reconstruction efforts.
The festivities included a marching band and was attended by dozens of young Somalis, many with soccer balls in hand. 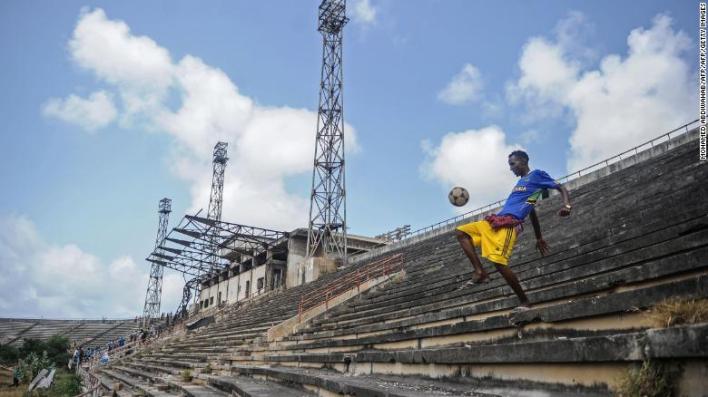 Prior to AMISOM control, the stadium was a base for Al-Shabaab, which was designated as a foreign terrorist organization by the Unites States in 2008.

The site was used for many of the group’s terror activities including public executions. All sporting activities were also banned by the hardline Islamic militants.
The stadium was captured by AMISOM forces on September 6, 2011 during an operation to liberate the Somali capital from Al-Shabaab.

Years later, the tattered stadium still shows all the signs of its violent past.

Nevertheless, Somalis cheered the long-awaited return of sports to the country’s largest stadium.

US reopens diplomatic mission in Somalia after 28-year closure

Somali Parliament Apologizes for ‘Wrong Report’ on Missing US $40 Million

Al-Shabab’s former No. 2 leader runs for office in Somalia

FINAL COMMUNIQUÉ OF THE OIC CONTACT GROUP MEETING ON SOMALIA

OIC Ministerial Contact Group on Somalia to Meet in Mogadishu